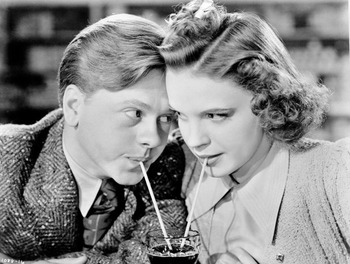 Babes in Arms is a 1939 film directed by Busby Berkeley, starring Mickey Rooney and Judy Garland.

Mickey Moran (Rooney) is the teenaged son of old vaudevillians Joe and Florrie Moran. They live in a small town that's home to a lot of vaudevillians. Joe and Florrie used to be big stars on the vaudeville circuit, but their careers tanked after the coming of talking films at the end of the 1920s, as did those of their friends in the vaudeville neighborhood. Joe is an aspiring performer himself, and he's trying to make it in singing and songwriting, along with his girlfriend Patsy Barton (Garland).

Joe and Florrie hit upon the idea of a vaudeville nostalgia tour to involve all of the old vaudevillians from their town. However, Joe refuses to let Mickey and the other kids of the neighborhood come along and play in the show, despite their obvious talent. Even worse, some of the local busybodies are trying to get the vaudeville kids sent away to the "state work school" now that their parents are leaving. So Mickey, Patsy, and all of the other kids decide to put on a show of their own, to prove to their parents that they have what it takes.

Based on the musical Babes in Arms by Richard Rodgers and Lorenz Hart, although the story is greatly changed.

Margaret Hamilton plays Martha Steele, one of the snooping busybodies who want the vaudeville kids sent away.