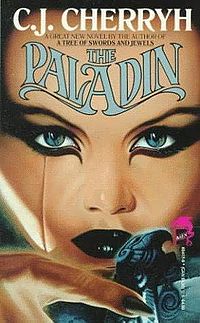 Cover of the first edition

The Paladin is a 1988 stand-alone Low Fantasy novel by C. J. Cherryh, better known for her science fiction. In a land resembling medieval China in some ways and similar-period Japan in others, young pig-keeper Taizu shows up at the door of legendary, exiled swordsman Master Saukendar, seeking martial training so that she can exact revenge on those who killed her family. Saukendar has turned down every hopeful who's ascended his mountain to disturb his exile, but Taizu is determined to be the exception.

Saukendar isn't all he's cracked up to be, and yet he is; a lot of the story is about the inner man, Shoka, versus the outer legend, Saukendar. The story is largely told from his perspective, and we watch as Taizu changes him just as much as he changes her.

Written in the same year as the final volume of the Morgaine Cycle, Exile's Gate, The Paladin has a very similar feel. It takes the same Asian, Samurai-influenced aspects seen in Vanye and applies them to a more Asian world and (unusually for a Cherryh viewpoint character) a more mature man, inverting the age and experience dynamic of the Morgaine series but not so much the emotional one.

Despite the similar name, it has no relations whatsoever to the trope The Paladin, nor to army hero in Have Gun – Will Travel. Also have zero relations to the Videogame Paladins.