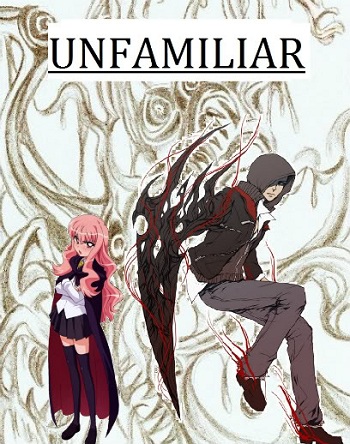 Louise: What makes you think my familiar is something other than a simple human commoner?
Kirche: When he put his hands on your shoulders, I saw his face change.
Louise: Who wouldn't want to make faces at a shameless woman like you?
Kirche: This is serious, Vallière. You remember that sound it made? I know you heard it because you looked up. Your familiar's face changed. It started wearing your face.

There are many The Familiar of Zero fics where Louise summons a different person at the beginning of the story, providing dynamics parallel to or wildly disparate from those in canon. In very few of those stories, though, is the summoned being an unstoppable, betentacled monstrosity fresh from (literally) chewing his way through most of the U.S. Marine Corps.

Started in the wake of The Hill of Swords on the SpaceBattles Fanfiction Forum, Unfamiliar

, by Cpl_Facehugger, is a crossover between The Familiar of Zero and [PROTOTYPE], where Louise summons Alex. It's actually less unfair than the premise sounds (no Mercer Attacks Everyone Dies, for example).

See [PROTOTYPE] and The Familiar of Zero for the tropes of those respective universes.