Ride / The People Under the Stairs 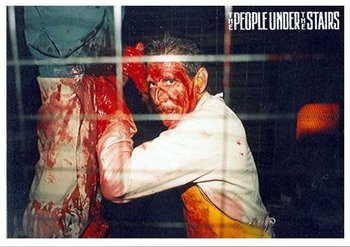 Haunted Sound Stage #23. Take a trip through the cryptic set that you will never forget... ever! (1992 description)
Soundstage 23 is haunted. Beware! The walls are alive with terror! (1993 description)
Advertisement:

Not much information about this house exists due to its age. It is however known that it was a very gory house. There were staged beheadings of scareactors. One of the rooms featured Daddy, one of the villains from the movie, taking meat from a corpse and throwing it.

In 1993, the house was largely the same, except for the addition of The Roach Man.

This ride provides examples of: