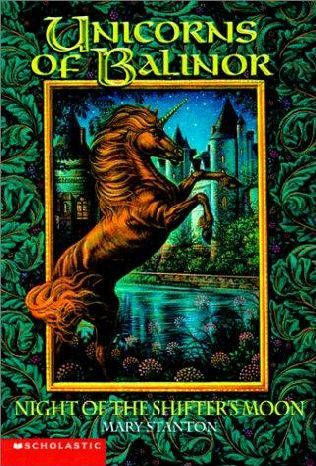 A series of eight short books by Mary Stanton.

It is a fantasy-steeped horse story that begins with the heroine Arianna Langley (Ari for short) waking up in a hospital with both her legs broken, only recalling her own name—and that of her horse, Chase. After encountering her collie Lincoln, who came with a ruby necklace, she is discharged to Glacier Ridge Farm with her foster parents, Frank and Ann Langley, and the local Dr. Bohnes, who makes sure her legs mend properly. Eventually, she starts hearing a voice in her head when Chase is angry, having strange dreams where a unicorn mare talks to her, and finding spiral-shaped pebbles around the stable.

When her foster parents say they need to lease Chase out to Lori, a wealthy and snobby girl who's taken a shine to him, both Ari and Chase are adamantly against it, despite Ari's hefty hospital bills leaving them no other choice. One spectacularly bad session with an angry Chase later, the pair run away to the nearby caves—and they're unfortunately followed by Lori, who won't give up until she gets Chase.

After falling through a tunnel into a strange forest, they get through it unscathed and end up in a town called Balinor. It's discovered that the animals can talk, but ever since their princess and her unicorn went missing, they have slowly begun losing their speech. Turns out that Ari is the Royal Princess, while Chase is both a unicorn and the Lord of the Animals. His horn was broken when the royal family got betrayed by the malevolent Shifter.

Both the necklace and the stones Ari found were actually parts of Chase's horn, which she eventually restores, but that's nowhere near the end of their troubles: They still have to defeat the Shifter. When that's done, Ari needs to earn the right to continue as the Royal Princess through three trials that test her leadership and diplomatic skills—and even when both of those tasks are done, the latest book ends when she begins the search for her parents and brothers.