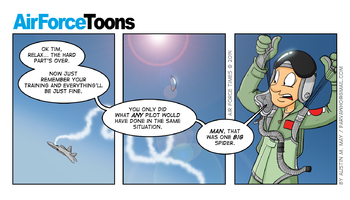 Gentlemen, we are boned

For various reasons, the comic updated here from April 2012 to September 2013

The strip updated fairly regularly from 2007 to 2013(at least as regular as you can get with the constraints of a deployment schedule). The strip went on a two-year hiatus from 2013 to 2015, and is back to updates as frequent as possible. The pre-hiatus archives can be found here.

There is now a Characters page. Give it some love.