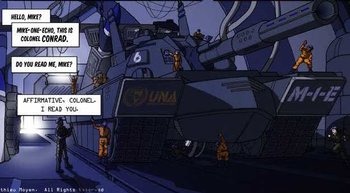 Say hello to Mike.
"These Reds think we'll just roll over while they chew up another country. They think we're weak. Well, I'll show them "weak"! I'm going to punish them for what they've done! Oh, I'll make them suffer for it! SUFFER! And if there's two of us and one of them, WE WIN!"
— Col. Conrad Haulley, UNA note channeling his inner General Ripper
Advertisement:

is a Military And Warfare Webcomic by Mathieu Moyen, a.k.a. "Mr. Average". In this comic, the 20th century played out a little differently from ours. World War I dragged on for ten years, and World War II never happened. The casualties from the "Great War" were so devastating that the "Great Powers" were determined to avoid a repeat at all costs.

It is now 1997, and tensions are high. The United Nations Alliance note the USA, Canada, Mexico, Central America, Australia, the Philippines, Japan and parts of Africa is in a standoff with the Federative Socialist Republic note Russia, China, the Caucasus, most of Europe, Central Asia and parts of Southeast Asia in Africa. A minor border skirmish spirals out of control, and it appears that the "Cold War" is about to turn hot.

6-Commando usually updates once every Monday, unless there are technical difficulties (like Real Life rearing its ugly head).