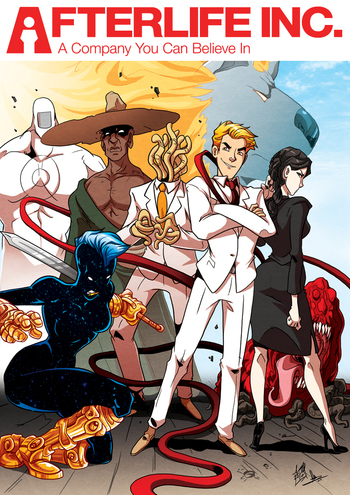 is an ongoing comic series written and created by Jon Lock, and illustrated by a rotating cast of artists. It has been published online and in print since 2011.

Afterlife Inc. is about a con-artist named Jack Fortune who dies, discovers an afterlife in chaos, and decides to take over and run it like a business. A mysterious Calamity has wiped the former ruling body from existence, creating a power vacuum in which Jack's new business model can thrive. Now, with an unlikely assortment of angels and allies at his side, Jack strives to modernise the afterlife while dealing with the dark secrets at the heart of his brave new world.

Afterlife Inc. is part of the Big Punch Multiverse, which includes Cat And Meringue and 7STRING.