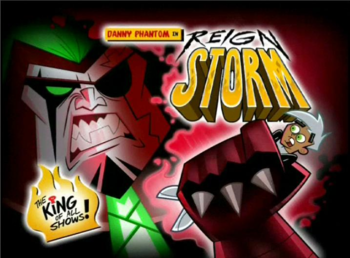 "The King Of All Shows!"

When Vlad Masters/Vlad Plasmius, Danny's Arch-Enemy, attempts to steal the Crown of Fire and Ring of Rage of the ghost king, Pariah Dark, he accidentally wakes him up in the process. The king's arrival sends all the Ghost Zone's residents fleeing to Earth, and Vlad's theft of the Ring of Rage sends Pariah Dark's armies to fetch it. In the middle of all this, Danny has to deal with his new friendship with rival ghost hunter Valerie Gray and Vlad hiding out at his parents' house. It falls on Danny to defeat the ghost king, keep his town safe, and stay one step ahead of Vlad's manipulations.