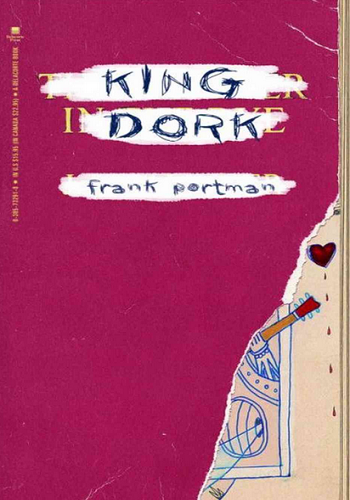 Tom Henderson (aka Chi-Mo, aka King Dork) is a nerdy, disaffected high school sophomore. Bored with the drudgery of high school, the abuse of "normal people," and his embarrassing hippie parents, he spends his free time coming up with band names with fellow terrible musician Sam Hellerman.
Advertisement:

After Tom's boring English class gets off to a dreary start, Tom finds his deceased father's old copy of The Catcher in the Rye, along with several other books, all of which contain underlinings and notes that help Tom decode several ambiguous, coded notes his father left in the books. All Tom knows is that his father's buddy in coding went by the nickname "Tit."

While Tom is figuring out the mystery of his dad's coded messages, he has his first sexual encounter with a spacey stoner chick named Fiona. Unfortunately, he cannot find any evidence of Fiona's existence, leaving Tom with another mystery to piece together.

Notable in that the cover, featuring the title and author of The Catcher in the Rye crossed out, explicitly advertises the book as a modern counterpart to Catcher.

The book was written by Frank Portman (a.k.a. Dr. Frank), the lead singer and chief songwriter of Bay Area punk band The Mr. T Experience. A sequel titled King Dork Approximately was published in 2014. Portman has also written another Young Adult novel in the same universe (an adult Sam Hellerman makes a cameo in it), Andromeda Klein, published in 2009.