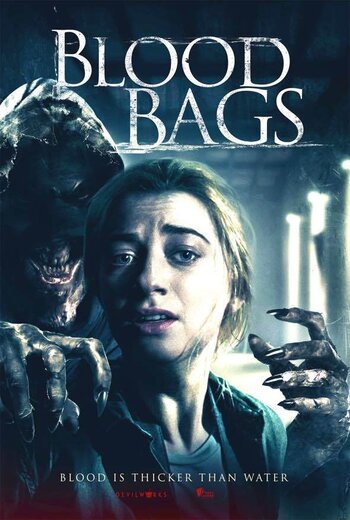 : (med.) a rare, recessive, metabolic disease affecting heme.
Its main symptoms include anemia and extreme skin photosensitivity.
It is believed to be the origin of the vampire myth.
The first lines in the movie.

Blood Bags is an Italian Horror Movie by Emiliano Ranzini.

Tracy (Makenna Guyler) is an American college student studying photography in Italy, and has a fascination with ancient architectural design. She wants to get a few more photos of old buildings before she has to go home. Some people suggest she check out an old mansion in a neighbourhood close by, so she and her friend Petra (Marta Tananyan) go and check it out.

When they get there, Tracy is over the moon at the chance to try out her new camera filters, and starts clicking away. However, after Petra disappears, Tracy learns that there's someone else in the mansion with her, and he has sinister plans in mind for her. Now, with the help of a thief who was hiding in the house since last night named Alex (Emanuele Tureta), Tracy needs to find a way to escape whatever fate this mysterious person has in store for her.