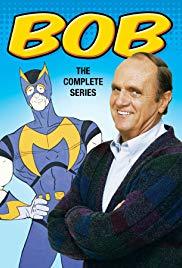 "Well, Johnny, I'd already done The Bob Newhart Show and Newhart, so we had a choice of either calling the new show Bob or The Show. I think we made the right call."
—Bob Newhart on The Tonight Show Starring Johnny Carson
Advertisement:

Bob Newhart's fourth series and third sitcom, Bob was a 1992–93 CBS series which starred Newhart as Bob McKay, a graphic artist who started out as a comic book artist and currently works at a greeting card company. When Ace Comics contacts him with an offer to revive his 1950s superhero comic Mad Dog, he quits his greeting card job and accepts the job to help relaunch his comic. Unknown to him, however, is that his partner, Harlan Stone, envisions a darker, edgier Mad Dog for the 1990s.

In the second season, Ace Comics went out of business and Bob returned to the greeting card company, with very little of the supporting cast returning.