Film / The Gleaners and I 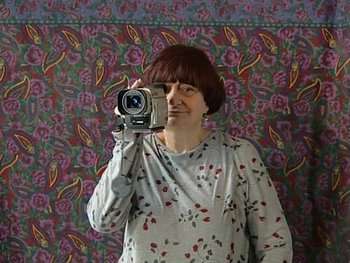 The Gleaners and I, often referred to by its French title Les glaneurs et la glaneuse, is a 2000 documentary by Agnès Varda. Hold that, a very famous documentary that is used as one of the markers of the genre. Despite being made in the year 2000, its visual quality looks a lot more like the late '80s. Probably because a lot of the time Varda was filming herself with a handheld camcorder from the time, which hadn't really improved in quality.

The documentary is the journey of Varda around rural France and exploring various meanings of "gleaning". It is not completely shot in either of the two typical documentary forms (cinéma vérité and Direct Cinema), instead using a combination of both and then some personal-interaction and storytelling segments that fall more under travelogue, and some other magazine cinema style clips. This formal variety reflects the variety of ways of interpreting the world, and the definition of gleaning.

The parts that people remember most from the film are the farmers pulling potatoes, the trash-diving artists, and the interviews with people in a cafe who remark on the history of gleaning and how this part of rural culture is being lost. There is also the painting "The Gleaners"

that Varda uses for inspiration, and even manages to get friends at the freaking Louvre to go into storage and rearrange a bunch of famous historical pieces so that she can have a jaunt with the original.

It got a sequel called Deux ans après in, you guessed it, 2002. Varda goes to talk with the people featured in The Gleaners and I, and then starts a different style of storytelling abruptly when she talks to people who had been inspired by the 2000 film and the changes they made.