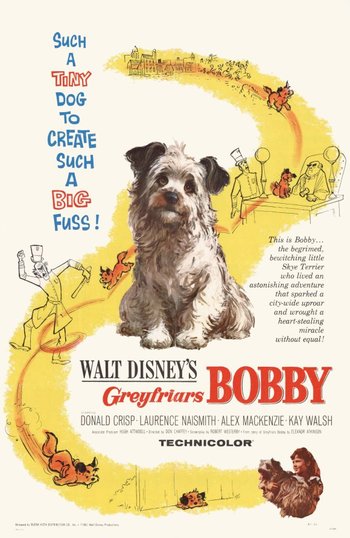 Greyfriars Bobby is a 1961 live-action Disney film, directed by Don Chaffey and starring Donald Crisp and Laurence Naismith. It's adapted from the 1912 novel of the same name by Eleanor Atkinson, which in turn was (loosely) based on real events in Edinburgh in the 1860s.

Auld Jock (Alex Mackenzie), a shepherd, has lost his job at a farm and gone to Edinburgh to find a new job. He is followed by a Skye Terrier named Bobby, who belongs to his former employer but thinks he belongs to Auld Jock. Jock takes sick and dies of pneumonia, and is buried in Greyfriars Churchyard. Bobby tries to stand guard over his grave, but there's one problem: dogs are strictly forbidden from the grounds, and the caretaker, James Brown (Crisp), puts him out.

John Traill (Naismith), who owns a dining room where Jock used to take his meals and blames himself for Jock's death, feeds Bobby and finds ways to smuggle him into the churchyard, much to the annoyance of Mr. Brown. And then a law is passed that requires all dogs to be licensed, a policeman notices that Bobby has no collar, and Mr. Traill finds himself in court on charges of owning or harbouring a dog on which he has not paid the license tax.