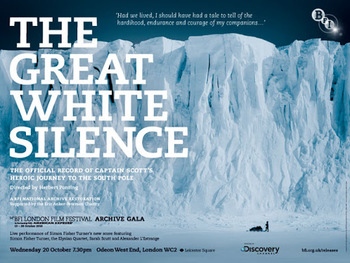 The Great White Silence is a film from 1924 by Herbert Ponting.

It is a documentary of the ill-fated Terra Nova expedition

to the South Pole, 1910-1912. The expedition, led by Royal Navy Captain Robert Falcon Scott, had hoped to be the first to reach the Pole. Cinematographer Ponting accompanied the expedition as it left New Zealand on board the Terra Nova, headed for the Ross Sea and the Antarctic continent. Ponting's camera documents the enormous glaciers that the ship passes as well as the ice fields that it hacks through, and is sometimes stuck in. There's a lot of attention to Antarctic wildlife, including scenes with seals and killer whales and, naturally, an extended sequence with penguins.

The expedition leaves the ship and unpacks their material for the journey to the Pole, including ponies, dog teams, and motorized sledges with caterpillar tracks that are said to be a forerunner to the tank (tanks being invented just a couple of years later for use in World War I). Ponting did not accompany the teams inland, so crude animation, still photos, and excerpts from Scott's diary are used to tell the terrifying end of the expedition. Scott and the four men who accompanied him reached the Pole only to find that rival explorer Roald Amundsen had beaten them to it. Then, on the way back, bad weather and insufficient supplies led to the deaths of all five men. The film ends with a photo of the cairn under which three of the men (two having died earlier) are buried.

For a considerably more cynical take on Robert Scott, see the 1985 TV miniseries The Last Place on Earth (one scene in that series shows Herbert Ponting rolling his camera, taking this film).