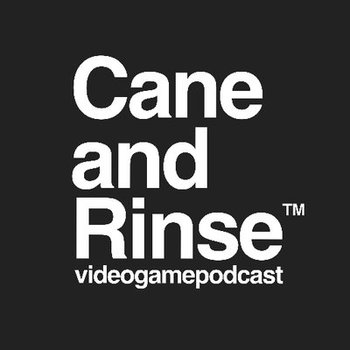 Hello, and welcome to the Cane and Rinse podcast!
Advertisement:

The Cane and Rinse podcast is a weekly in-depth discussion on specific video games, ranging from million-selling series such as Final Fantasy to smaller indie titles such as Thomas Was Alone. The podcast is generally hosted by Leon Cox, joined by an assorted panel depending on the game in question. Each member of the panel is tasked with playing the game to completion, before discussing each aspect of it in minute detail on the podcast.

Since 2011, the Cane and Rinse team have released over 300 issues, each between an hour and two hours long. As well as the mainline podcast, the team are also responsible for Sound of Play, a show dedicated to music from video games.

Spin-offs include Quick Rinse, in which panel member Darren Gargette has a quick go of an upcoming game; as well as interviews with game developers, designers and composers for both Cane and Rinse and Sound of Play. The site also has a blog, for which community members write articles and interviews, and a forum, which Leon is keen to point out at the close of each episode.

Joining me, Leon Cox, in this issue...