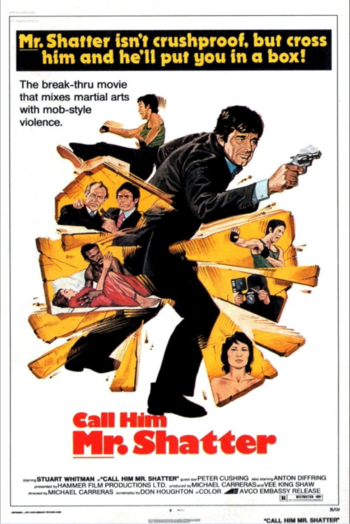 Why not Mr. Breaker?

Shatter, also known as They Call Him... Mr. Shatter! (as seen in the poster above) is a 1974 spy-thriller martial arts movie joint-produced by England's Hammer Studios and Hong Kong's Shaw Brothers, their second and last collaboration after The Legend of the 7 Golden Vampires.

An international assassin named Mr. Shatter (Stuart Whitman), after what was supposedly his last assignment in Africa, suddenly finds himself being hunted down by his former superiors. Escaping attempts on his life, Shatter made his way to Hong Kong, where he meets Tai Pah (Ti Lung), a local martial arts master and kung fu expert (yeah... did we mention that's friggin Ti Lung?). Shatter promises Tai Pah half of his fee from his most recent assassination, in exchange for Tai Pah's assistance to find out the truth behind his double-crossing, and soon enough both men ends up kicking ass all across Hong Kong while trying to stay a step ahead of various hired killers working for Shatter's villainous ex-boss Paul Rottwood (Peter Cushing).

Unfortunately for both Hammer Studios and Shaw Brothers, who had signed a 3-picture co-production deal, their third film never quite materialized due to Golden Vampires and Shatter both under-performing at the box office.

They Call Him Mr. Troper!