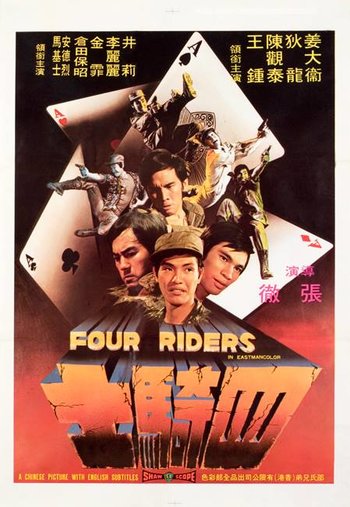 Four Riders, also known as Hellfighters of the East, is a 1972 Shaw Brothers Martial Arts Movie directed by Chang Cheh, starring David Chiang, Ti Lung, Chen Kuan-tai and Wang Chung. Oddly enough, despite being one of the usual "Chang Cheh directs, David Chiang and Ti Lung acts" output from the 1970s, the film is actually one of their few collaborations which isn't a wuxia-style historical period piece. It's also notable for being one of the studio's few films that was filmed overseas, in this case in Seoul.

The year is 1953, shortly after the Korean War. In a military base in the Korean-border, Sergeant Feng-xia (Ti Lung) and Private Gao Yin-Han (Wang Chung) decides to flee the base and make a move towards the big city, hoping for a quick break from military duty. Meeting up with Private Gao's friend, Li Wei-Shi (Chen Kuan-tai) who is currently off-duty due to being hospitalized, and Jin-yi (David Chiang), another soldier who went AWOL weeks earlier, the quartet unexpectedly stumbles into the operations of a drug smuggling ring involving the Yakuza.

Action ensues. And everyone gets to beat the snot out of numerous faceless mooks before the credits start rolling.