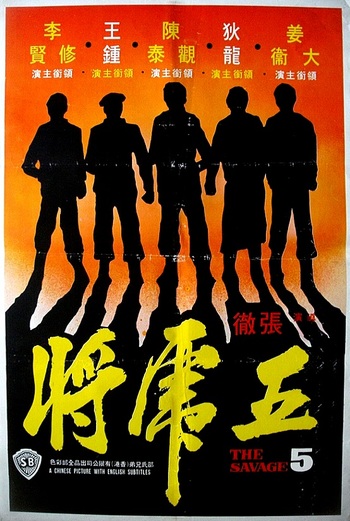 A gang of bandits, in the aftermath of raiding a government-owned vault, arrives in the outskirts of a rural town, hauling behind them a locked, metal chest full of silver, which they have looted from the authorities. Holding the entire town hostage, the bandit leader demands forces the benevolent locals whom weren't prone to violence at all, into giving them refuge, as well as ordering the village's blacksmith to unlock the chest of silver for them, as the bandit capable of unlocking chests was killed during the robbery. A limit of seven days is given, and should the villagers fail to open the chest, the bandits will then kill everyone to cover their tracks.

Amongst the villagers, however, a number of hidden experts and martial artists have decided to take matter in their own hands. Nope, they're not leaving to seek help - which would be impossible anyways. Instead, they are going to fight back - five of them, including Fang Yi Fei (Ti Lung) the drunk, Chen Deng (David Chiang) the pickpocket, Ma Dao (Chen Kuan-Tai) the woodcutter, Wei Min Hui (Danny Lee) the silversmith, and Yao Guang (Wong Chung) the travelling acrobat, are taking a stand, and it's them against the ruthless bandits.