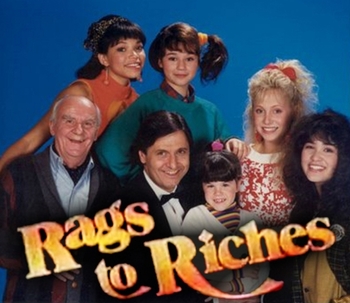 Rags to Riches is an American musical comedy-drama that was broadcast on NBC for two seasons from 1987 to 1988. Set in the pre-British Invasion 1960s, the series tells the story of Nick Foley, a self-made millionaire who adopts five orphan girls. Each episode included musical scenes of hit songs from the era performed by the girls integrated into the plot (with the lyrics modified to provide commentary on the storyline).

Nick Foley (Joseph Bologna), the millionaire owner of Foley's Frozen Foods, is a street-wise New Jersey-born businessman with a playboy lifestyle. In the TV movie pilot which launched the series, a group of six girls, living together in an orphanage, have formed a tight-knit group, but face being separated when the orphanage closes down. Foley desperately needs to cultivate a family man image to seal a business and when he reads an article about them, invites them all to live in his Bel-Air mansion. His motives are entirely selfish, and he doesn't plan to keep them after the deal is complete, but his plans change as he grows attached to the girls, and he ends up adopting them permanently.

The adjustment is huge on both sides, as Foley initially has no idea how to be a parent. Having spent much of their lives in a run-down orphanage, the girls suddenly find themselves in a life of luxury (hence the series' title). The series follows the trials and tribulations of the girls and a man who has previously never loved anyone but himself and often struggles to cope with his new family.

In the pilot for the series, Foley takes in a group of six girls; however, Foley only adopted five of them for the remainder of the series' run: Rose, 17; Diane, 16; Marva, 15; Patty, 14; and Mickey, 8. The sixth girl, Nina, appears only in the pilot (after the pilot was produced, it was decided that six children was too many for the series cast, so Nina was written out of the series as having been reunited with her birth mother).

The series differed from regular comedy-dramas in that the girls would frequently burst into song to help explain their feelings or move along the plot. Each episode therefore contained at least two musical scenes with covers of popular songs from the early 1960s with the lyrics changed to provide commentary on the storyline of the episode. Some consider Rags To Riches a precursor to Glee, where every episode is a Musical Episode.

"This show's a trope-maker, and we can make these tropes come true":