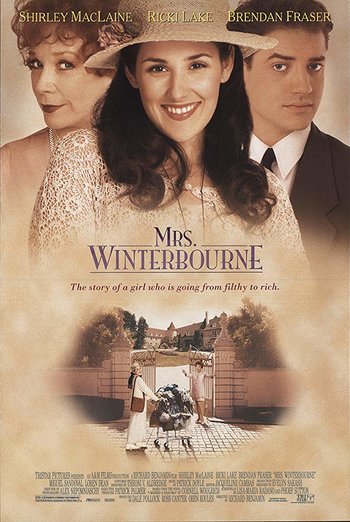 Mrs. Winterbourne is a 1996 American romantic comedy-drama film directed by Richard Benjamin, starring Shirley MacLaine, Ricki Lake, and Brendan Fraser. It is loosely based on Cornell Woolrich's novel I Married a Dead Man, which has already been adapted to film as No Man of Her Own (1950), and the Hindi film Kati Patang (1970).

Connie Doyle (Lake) is kicked out by her lowlife boyfriend Steve (Loren Dean) after getting pregnant, and ends up on a train where she is rescued by the friendly couple of Hugh Winterbourne (Fraser) and his also pregnant wife, Patricia. Tragedy strikes when the train suddenly crashes, killing Hugh and Patricia; however, Connie is mistaken for Patricia. With no money and zero connections, Connie decides to don the identity.

She finds out the Winterbourne family is loving and caring, especially Hugh's mother, Grace (MacLaine), who had never met Patricia before, and Hugh's identical twin brother Bill (also played by Fraser), and she lives a rather happy life until Steve comes back to her life and starts blackmailing her.