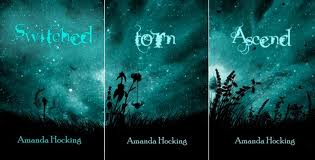 Nothing about me resembled a pink-haired doll with a jewel in its stomach or a creepy little monster that lived under a bridge. Admittedly, I was kind of short, but Finn was at least six feet tall.
"You're thinking of trolls the way they've been misrepresented, obviously," Finn hurried to explain. "That's why we prefer Trylle. You don't get any of that silly 'Billy Goats Gruff' imagery. But now I have you staring at me like I have totally lost my mind."
—Switched
Advertisement:

The Trylle Trilogy is a fantasy book series by American author Amanda Hocking. It follows the story of Wendy Everly, an almost eighteen-year-old teenaged girl who lives with her aunt Maggie and brother Matt. She recounts her sixth birthday party, when her less-than-stable mother grows convinced that Wendy stole the baby she gave birth to, and proceeds to attempt to kill her.

We then cut back to the present day, where Wendy has forced both her aunt Maggie and Matt to uproot their lives and move when she is again kicked out of school. She begins to be disturbed by the also-new student Finn Holmes who constantly watches her, emotionless and unaware. Wendy ponders on her secret skill; she's always known that, ever since she was little, she has always had the ability to make a person act however she wanted merely by thinking a command. Wendy begins to think her mother might have been onto something.

With the help of Finn Holmes, Wendy finds herself in a world she never knew existed - a world both beautiful and frightening, and Wendy's not sure she wants to be a part of it.