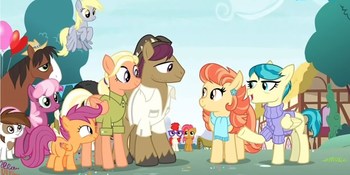 Should they stay or should they go?
Written by Nicole Dubuc
Advertisement:

A young pony named Skeedaddle happily races through town to look for the Crusaders, finding that they're at Scootaloo's home, being watched by Scootaloo's Aunt Holiday and Auntie Lofty. Skeedaddle is pleased to show the trio he got his cutie mark in knot making, all which stemmed from ideas the Crusaders had given him. As he leaves, Scootaloo's aunts comment on the success of the Crusaders, but then realize they will be late for their train home for the weekend. Just after her aunts leave, Scootaloo gets a postcard informing her that her parents are coming home.

Scootaloo is far too excited at school the next day to pay attention, singing the praises of her parents who have important jobs in Equestria, studying exotic wildlife to find new medicines and remedies for ponies. Suddenly, a cragodile bursts into the classroom. Amid the chaos, Scootaloo's parents - Snap Shutter and Mane Allgood - subdue the creature quickly and apologize for the commotion. Scootaloo is thrilled to see them, and Cheerilee lets class out early. Snap and Mane decide to take Scootaloo and her friends out for a sundae. They spend time catching up on recent events, and Scootaloo wonders how long they'll be in town. Her parents reveal that they have new jobs in a more exotic location, where they can live together as a family, and they're only here for the weekend to retrieve their belongings, sell the house, and take the train to their new home... with Scootaloo. The Crusaders realize this will break up their friendship, but Scootaloo's parents insist she can still visit Ponyville, or vice versa.

Back at their treehouse, the Crusaders cry, not wanting to let their friendship go. Rainbow Dash arrives, having tickets to give them for the next Wonderbolts show. Upon hearing the Crusaders crying, Rainbow tells them they should never give up and try to keep their friendship together. Inspired, the three try a few schemes over the next few days to have her parents decide to stay in Ponyville, but they're committed to moving. Not wanting to go, Scootaloo prepares to run away to live with her aunts, and Apple Bloom and Sweetie Belle decide to join her.

At her aunts' home, the pair are happy to see Scootaloo and were unaware of her parents returning, due to a mixup in the mail. They express the same concern about breaking up the Crusaders, knowing that they have helped a lot of ponies in town and around. The next day, with the train nearly ready to go, Scootaloo tells her parents to come to the center of town, where many of the townsponies and others that the Crusaders have helped are holding a Crusaders Appreciation Day, to celebrate the importance of the trio. Skeedaddle points out how many ponies and other creatures the Crusaders have helped, and Mayor Mare gives them a special key to the town. As the event winds down, Snap and Mane wave Scootaloo over, and admit they never realized that her job with the Crusaders are just as important as their job, and they will allow Scootaloo to stay in Ponyville. Her aunts, already planning ahead, announce their plan to move to Ponyville and let Scootaloo live with them. Scootaloo runs to hug her parents and promises to visit them often, and then joins the celebration with Apple Bloom and Sweetie Belle.