Comic Book / The One Hundred Nights of Hero 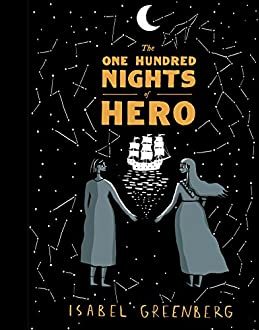 The One Hundred Nights of Hero is a graphic novel by Isabel Greenberg. It's set in the same universe as her earlier work The Encyclopedia of Early Earth, and shares a few characters, but is a separate story - stories, rather.

Its plot, very briefly: two men, Manfred and Jerome, make a bet about whether Manfred can seduce Jerome's wife Cherry while Jerome is out of town for a hundred days. Manfred intends to win the bet, even if he has to rape Cherry, which is a problem because "unfaithfulness" will result in Cherry's execution. Her maid Hero, who she's in a relationship with, comes up with a clever solution: she'll tell stories to Manfred for a hundred days and so keep him from raping Cherry.

This is simultaneously a framing device (we see several of Hero's stories) and the core plot.