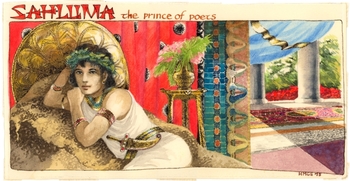 Sah-luma, Prince of Poets, Poet Laureate of Al-Kyris. Art by Pyracantha.
Marie Corelli's Ardath (1889) is a Victorian fantasy about Theos Alwyn, a Lord Byron Expy with Writer's Block. At a mysterious monastery he seeks help from the master Heliobasnote his second appearance in her work — the first was in A Romance of Two Worlds, whom he's been told can induce Astral Projection in willing subjects. When Heliobas refuses to do this, Theos exerts his own considerable Psychic Powers (which he's unaware he has) and puts himself into this state. Upon waking he writes a new poem, Nourhalma, and says he has met an angelic woman, Edris, who asks him to meet her at "Ardath"note An open field close to Babylon, in the Apocryphal Book of Esdras.. He feels he's known and loved her since before the beginning, but once he gets there she ascends to heaven before his eyes. Bereft, he passes out in the middle of the field, and this is where the story really starts.

The majority of the novel is dedicated to a Nested Story in the form of an intensely detailed dream-vision. Theos finds himself in a beautiful city-state called Al-Kyris where poets are very respected. The poet laureate, Sah-luma, befriends him and invites him to share in the glories of Kyrisian high life. But all is not well in the great city, and Theos discovers corruption and betrayal even in the holiest places.

Upon awaking, Edris is back and assures him it wasn't All Just a Dream — but then she vanishes again, so he returns to London. Nourhalma is a huge hit, but he experiences So What Do We Do Now? and constantly compares what he's learned and experienced in Al-Kyris with modern life in London. He goes wandering through Europe, comes to believe in Christ — though not in Christianity as we know it — and eventually finds Edris again.

Jessica Amanda Salmonson calls Ardath Corelli's "weirdest and most baroque novel". Among other things, it was a major influence on Lord Dunsany's dreamworld stories, and is thus part of the ancestral lineage of H. P. Lovecraft's dream cycle. It has often been compared with Vathek.