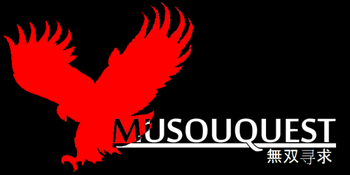 The Musou Verse is a collection of three quest threads in the style of Ruby Quest and Dive Quest: Musou Quest, Rider Quest, and the flashback episode Musou Quest Gaiden. They are collected at the Team Phantom Tiger blog

and discussed fervently on the IRC channel "#musouquest" on Rizon.
Advertisement:

Musou Quest begins with a newly-made ace logging onto their first serious game of a .hack-esque version of Dynasty Warriors: Gundam; things get serious when a "Static Gundam" glitch mech appears on the field and turns out to deal real, physical damage to the players - the player character, named "Red Hawk", is very rapidly drawn into the conspiracy while kicking copious amounts of ass. The first thread was adequate at best. Then it got FREAKING COOL.

Rider Quest is set in the same universe, following a joke made in a previous thread about Red Hawk living in the currently in-vogue Tokusatsu-filming area; it turns out that a number of Kamen Riders actually DO exist, and that Kamen Rider shows are made using actual footage of their combats in a Power Rangers-esque cut-and-paste style. The main character is a pseudo-Hardboiled Detective named Jack, who used to play "The Game" Way Back When; this Quest borrows heavily from Kamen Rider W, though with a significantly more Film Noir feel to it.

Musou Quest Gaiden again focuses on Jack - but much younger, back when he still played, and was completed shortly thereafter, fleshing out the story and generally functioning as epic foreshadowing.

Recently, a teaser for what appears to be a pure-fiction sequel, Musou Quest: Generation Break, went up on a portion of Terminal's home site; view it here.

This universe contains examples of: