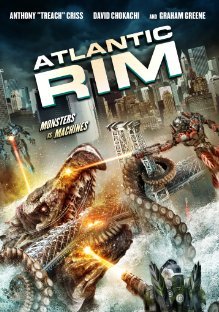 Atlantic Rim (also known as Attack from Beneath) is a 2013 film by The Asylum that (mostly) knocks off Pacific Rim.

In the movie, giant monsters begin hatching from eggs in the sea and start attacking the East Coast of the United States, forcing the Navy to use the Humongous Mecha they created (as part of a secret deep-sea rescue program) to combat them.

It was featured in an episode of Season 12 of Mystery Science Theater 3000, and at time of 'airing', stands as the most recent film the show's ever covered.

A sequel was released in 2018, just in time to cash in on Pacific Rim's sequel, Pacific Rim: Uprising. The navy's Mecha are brought out for the first time since 5 years ago to fight a new group of monsters attacking Los Angeles.