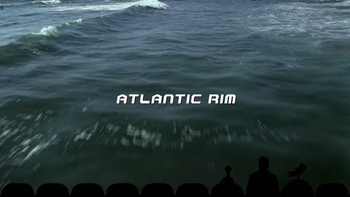 "Atlantic Rim? Could you be more Pacific?"

"I'm pinning him and I'm shaking and I'm fighting with him. Spitfire comes in, dude. He's got a full payload. The 50 Cal didn't even leave a scratch. He pulls up sharply, comes around for a second run. Spitfire balls up, dude, he comes in close. Drops it, nails it, BUH-BOOOOM! The thing is gone!"