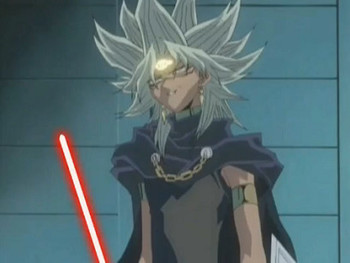 "Could I get a hug, binky boy?"
"So, Kaiba, are you ready to enter a world of pain? A world where the only noise you hear is that of your haggard breath as you choke on your own entrails?"
— Yami Yugi intimidating Seto Kaiba in a Shadow Game of Season Zero Abridged
Advertisement:

Just because this is a comic parody doesn't mean it can't be... scary at times.