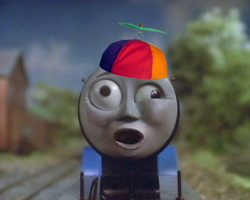 WTL Network, short for "Where's the Line?", was likely the most notable maker of Thomas the Tank Engine YouTube Poop in the medium's existence. His (actually their, as the network was made up of three people who collaborated on poops) poops included a wide network of Running Gags, and established a humor standard that subsequent poopers have aspired to match.

The main account was closed due to copyright infringement claims by HiT Entertainment, the current owners of Thomas, while in March 2013, without warning, both their alt account and Poop Troupe channels were closed, for reasons yet unknown. Since then, HiT Entertainment has been berated by several YouTubers, especially WTL Network and its fans, in a similar way to Viacom which has also removed videos for the same reason.

Many of WTL Network's videos can still be found on YouTube in the form of re-uploads by other users, as long as you know their titles.

He is recently active on a new channel

, where in January 3, 2017, he made a quiet comeback, and has since begun making new Thomas poops, as well as using other sources such as The Simpsons, Tugs, Titanic (1997), Matilda, and even association football, and is posting his old YouTube poops on Archive

. He has also joined some of the newer generation of Poopers in the 20 Minute YTP Challenge series of videos.

Chazlar and the Chocolate Parody:

Marge And The Funny Whelk