Fanfic / Conversations with a Cryptid 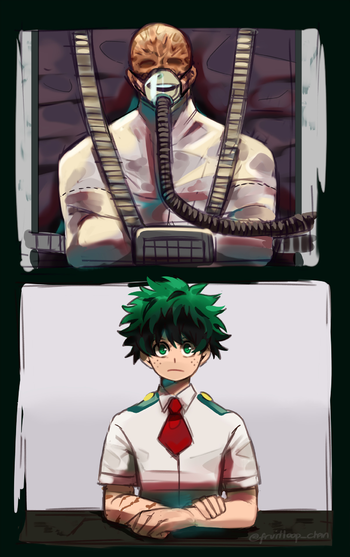 The man was over a century old. There had to be more to it. In hindsight, it hadn't been one of Izuku's better ideas. note Used with Permission by the fruitloop-chan

"It seems we share a hobby."
— All For One to Midoriya Izuku
Advertisement:

Months have passed since the defeat of All For One by All Might's hands at Kamino Ward. But any further investigation involving anything about him was quickly proven to be futile.

Enter Midoriya Izuku, with brimming determination, thinking that perhaps interrogating the supervillain himself would benefit the betterment of society. And hey, maybe he could learn something interesting about the guy to satisfy his curiosity in the process as well. So it's pretty much a win-win situation, right? Well, except for All For One, but nobody cares about him.

Unfortunately, he isn't quite prepared to face what his research would cause to everyone, and what role he would ultimately play in the near future.

. The first part can be found here

Received a sequel in Kidnapping of a Cryptid

which details the fallout of Conversations with a Cryptid.

A sequel entitled Woes of a Cryptid

Tropes Recurring to Entire Trilogy
Tropes Unique to Conversations with A Cryptid
Advertisement: