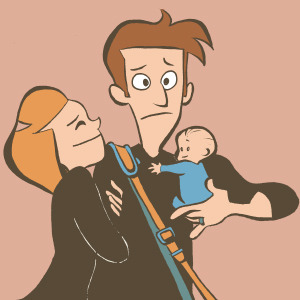 is a an autobiographical, Dom Com comic strip created by Wes Molebash that depicts his life as a husband and father. The comic launched on August 3, 2015, and is published on its own independent website as well as GoComics

. The cartoon begins with the birth of Molebash's son, Parker, and continues to tell the story of how the cartoonist and his wife, Kari, have adapted to parenthood.

MOLEBASHED originally began as a black-and-white comic strip titled The Molebashes and was published on the cartoonist's Facebook page during the fall of 2014. Surprised by the positive reaction of readers, Wes decided to reboot the comic with a new name, a new character design for the cartoon version of himself, and a limited color scheme. The cartoon currently updates every Monday, Wednesday, and Friday.