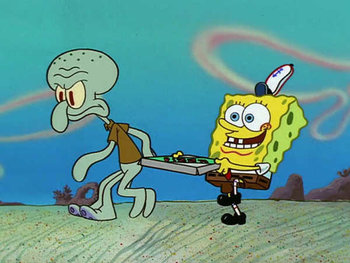 The Krusty Krab pizza is the pizza, for you and me!

"Pizza Delivery": A special task has been assigned to SpongeBob and Squidward: Deliver the very first Krusty Krab Pizza. However, there's a slight problem. Squidward made SpongeBob drive, causing the two to end up in the middle of nowhere and run out of gas. Now it's up to SpongeBob and his knowledge on how the pioneers survived to figure out how to get back to shelter and find something to eat before Squidward eats the pizza.

"Home Sweet Pineapple": After a swarm of nematodes devours SpongeBob's house, he and Gary are left with nothing but a pebble. Without a place to stay, SpongeBob tries building a house and living with Patrick and Squidward (none of those attempts work out) before giving up hope to live in the neighborhood, and sees no other option than to leave and move back in with his parents.

The YMMV examples for these episodes can be found here.