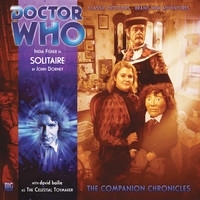 Doctor, you're such a Dummy!
I went to the Moon and I took Charlotte Pollard
But I didn't take The Doctor
—One of the Toymaker's riddles

Charlotte Pollard walks into an old-fashioned toy shop and is rather shocked when she realises she's completely lost her memory. The old gentleman running the store — the Celestial Toymaker — challenges her to a game. He won't tell her the rules or the goal, and she's not allowed to guess. Maybe the goal is to find the exit. Or maybe it's connected to the creepy, Byronic-looking ventriloquist doll in the velvet frock coat that makes her voice cry for help whenever she picks it up.

MacGyvering her way through the shop's puzzles, Charley eventually uses the doll to test a trap: an odd cupboard door, seemingly leading into a disintegrator. The doll is destroyed, and the Toymaker informs Charlotte that she just killed the Doctor and lost the game. He's a bit confused when the game keeps going anyway. It's apparently achieved sentience and refuses to let Charley and the Toymaker out. The Toymaker is right miffed, but since he's immortal anyway, he strings Charley along a while longer by making her think this is still part of his own plans. When she eventually figures out that she is not the one playing the game - the Toymaker is. That's why he couldn't see that the cupboard is actually the TARDIS. Charley makes a run for it, and finds the Doctor safely inside (albeit still as a doll and using Charley's voice). The Toymaker declines her invitation to escape along with them and instead stays behind to sulk at having lost, dying in his own trap.