"The corporate types get all frightened and confused if you let the fans over the wall to play in your garden." 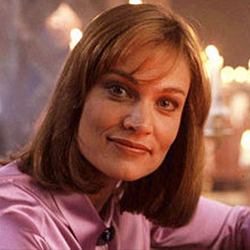 Daphne Lee Ashbrook (born January 30, 1963 in Long Beach, California) is an American actress, singer and writer, best known to geeks for having been in both Star Trek and Doctor Who, and best known to the internet for being One of Us to an almost unprecedented degree. She has also had recurring parts on JAG and The O.C..

, frequently in character, and has a second tumblr account where she blogs as Webdalek

. She also appeared in Big Finish Doctor Who alongside her Doctor Who co-stars, though (due to copyright issues) as different characters.

Ashbrook is notable as the only major aversion of the Fake American trope on Doctor Who; all other American companions have been played by Brits or Canadians.