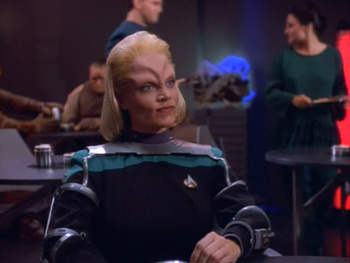 “No one can understand until they sit in the chair.”
Advertisement:

A new officer, Melora Pazlar, arrives at the station. She is Elaysian, from a planet with extremely low gravity, forcing her to use a wheelchair on other worlds. As she and Dr. Bashir become close, he conceives of a "cure" for her.