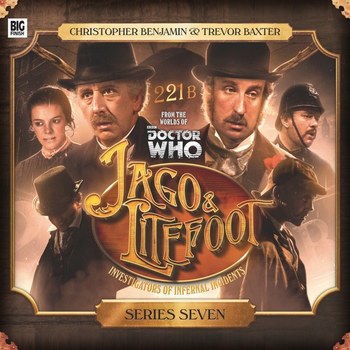 Investigators of Infernal Incidents
Part of the Big Finish Doctor Who Audio Play series, Jago & Litefoot is a spin-off featuring the hugely popular duo from the 1977 Fourth Doctor story The Talons of Weng-Chiang. The series started life as a Backdoor Pilot one-off release in the Companion Chronicles range, The Mahogany Murderers, which spawned a fully-dramatised range which lasted for 13 series (each consisting of a boxset of four hour-long episodes) and several special releases (including two stories in which they become the Sixth Doctor's travelling companions) before being sadly curtailed by Trevor Baxter's (Professor Litefoot) death in 2017. A final release, Jago & Litefoot Forever, served as a Grand Finale, with Litefoot being represented by previously unused recordings of Trevor Baxter. The scripts for the fourteenth series, which had been completed before Baxter passed away, were later adapted as single-reader audiobooks.
Advertisement:

Recaps are listed under Big Finish Doctor Who.