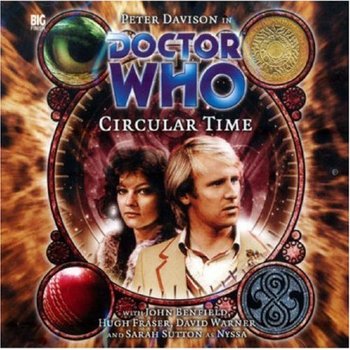 Four standalone episodes starring Nyssa and the Fifth Doctor, themed around the seasons. "Spring" and "Summer" were written by Mike Maddox, "Autumn" and "Winter" by Paul Cornell.

The Fifth Doctor and Nyssa visit a paradise planet, on a mission from the Gallifreyan High Council. They're there to stop the leader of the bird-people, who's another renegade Time Lord... but he doesn't want to leave. The bird society has a system of punishment that involves harming the loved ones of criminals in their stead. The Time Lord, Zero, is well aware of who the Doctor is, and what here's there for — and while the Doctor discusses the intricate politics of regeneration, and the fact that Zero's TARDIS isn't so much in the great lake as it is the great lake, Zero confesses that he needs his TARDIS in order to stay alive. The bird-people's language is much too complicated to work with the inherent Time Lord Translator Microbes alone, and Zero's entirely dependent on his TARDIS' translation circuits (as well as some glued-on feathers) for survival. The Doctor, who's not happy with his job, confesses that he's been sent by the Time Lords to have a word with Zero about the conditions of his exile — particularly, the fact that Zero hasn't done his forced regeneration yet. And isn't planning to, since regenerating would render him unable to keep the trust of the bird people. Nyssa is shocked to discover that the Doctor was exiled to begin with, let alone that he was executed (a fact he'd neatly kept hidden from her). Zero has some rather more interesting plans: he frames Nyssa and the Doctor and makes it seem like they murdered him, and uses the process and some local poison to regenerate cross-species, into the mystical prophet of the bird-people. He plans to take them soaring into the skies again using zeppelins, to abolish their backwards laws of punishment and to become a God. Five and Nyssa high-tail it out of there.

Off to the Tower of London (again) in the 17th century for the Doctor and Nyssa, who've been arrested for forgery, of all things. The Doctor absent-mindedly gave Nyssa a handful of future coins to pay with at a bar, and the arresting officer was the Doctor's old friend, Isaac Newton. Sir Isaac is interested in the coins. Really interested. The Doctor is in no mood to try and explain that he's regenerated since his days of lobbing apples at Newton's head, and tries an appeal to kindness, then an appeal to religion (much to Nyssa's confusion). He also tries to wow the guard by quoting from Jon Pertwee's "Who is the Doctor?". It goes... badly. Newton, for his part, doesn't care much about the Doctor. But he does care about what's on the coins — noticing the years, the Tudor symbols, the long life of Elizabeth II, the unification of Europe, the position of the Irish harp, the material of the futuristic metals, the wear and grease on the ancient ones... and, through a truly magnificent and very elaborate Awesome by Analysis sequence, correctly deduces everything there is to know about future Earth and the TARDIS. Realizing that the Earth will eventually fall victim to an extraterrestrial invasion, he initially concludes that the Doctor has travelled in time to gloat over the moments of human history. Following a very tense standoff, Nyssa steps in and talks cold science to Newton, and with a little help from the Doctor, is able to placate him with the wonders of the future and tales of Newton's own legacy. Unfortunately, the excitement brings on "one of his funny turns," and Newton then collapses, giving the Doctor the opportunity to send Nyssa back to the TARDIS while he does his best to keep Newton's seizure from becoming terminal. Mollified by the Doctor's honesty concerning the future, Newton allows him to go free - before passing out. The Doctor then returns to the TARDIS, saying that Newton will be fine in a few days, and in fact will already be bored with what he learned of time travel.

Stockbridge, sometime in the early 20th century. While the Doctor larks about playing cricket in early fall, Nyssa tries to write a novel about her life on Traken. A young Englishman named Andrew takes an interest in her writing, and fails to understand why Nyssa's story doesn't have a villain in it, or anything evil at all. Nyssa boldly decides to explain life on Traken to him, and reveals her alien nature. Andrew doesn't believe her. But he's intrigued by what a strange girl she is, and kisses her... Nyssa's first ever kiss. She's shocked by how natural and sudden it was. All her life, she'd imagined the moment as a logical thing, something that might happen and that she would have to deal with as part of a larger process, but now the moment has come and gone and Andrew will forever have that part of her. But, since the Doctor is hanging around for a few weeks for the cricket tournament, she decides to give romance a go. The Doctor's closest friend on the team (and much of the rest of the group) turns out to be a racist bigot, and although Nyssa toys with the idea of staying with Andrew forever, she soon realises that he's just a rude bloke, and that's she's more intrigued by the idea of a relationship than by him as a person. The Doctor's friend passes away before the final match; Andrew starts behaving more and more like a "typical man" (in a deliberately exaggerated way), driving Nyssa away. She correctly diagnoses him with commitment issues, and leaves him quietly in the night, leaving behind her finished manuscript. It includes a villain now. Nyssa was intensely scared by the idea of a manuscript about her dead planet living on even after she would die, but found herself becoming more mature about the idea during the writing process. If nothing else, being loved for a few weeks helped her deal with what the Master did to her and her family, and made her significantly more realistic and mature about the existence of villainy.

Nyssa, now many years older and happily married on Terminus, has a nightmare about the Doctor and realises that it's more than just a dream. Her husband, Lasarti, is a dream technology specialist, and Nyssa asks to be hooked up into his beta-stage experiment so she can replay her dream lucidly. In the dreamscape, she meets the Doctor — also happily married, old and by now retired. He's got a beautiful farm together with Peri, his wife, and Tegan and Turlough, his two young children. They enjoy their quiet life and watch the Master once a week on the telly. And he's quite convinced that Nyssa is his dream, not the other way around. Nyssa and Lasarti are eventually able coax him out of the fantasy, and the Doctor realises what's really going on: he's regenerating, and his mind and body are unable to cope with the spectrox poisoning. The entire dream is taking only a few seconds in real life, but the Master (with Kamelion's help) is trying to trick him into thinking he's a simple human who's happy living out his life with a family - so that he'll remain trapped in the dream and allow his body to die. Luckily, the TARDIS has created a zero energy sanctuary for him within the dream, and a little time there gives the Doctor the clarity to remember who he is: not even remotely suited for a quiet, retired life. He fondly remembers all his companions and gains the strength to complete his regeneration. While Lasarti burns down the house and finally puts Kamelion out of his misery, the Doctor gently takes Nyssa's hands, kisses her forehead and dashes off towards his Watcher. He mentions how colourful and proud his next regeneration will be, and jumps right into his Watcher, colliding with it and dragging them both back into reality.

Nyssa: All this from a handful of coins?
The Doctor: I'm so glad you didn't pay by debit card.