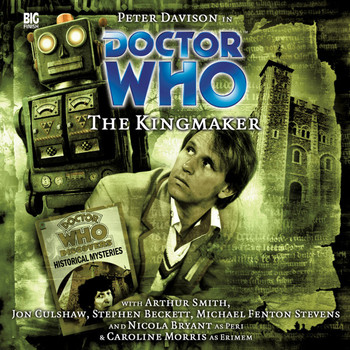 Peri and Erimem attend the first performance of William Shakespeare's Richard III in the 16th century, where the bad acting and the even worse audience make Erimem feel like a real Fish out of Water. She also breaks a man's arm for trying to touch her bum, earning her a bit of a What the Hell, Hero? from Peri. Meanwhile, the Fifth Doctor goes off to a have a few stern words with Shakespeare about artistic liberties taken. Well, actually, a few beers. Well, more than a few. Then a giant robot appears in the TARDIS. Still somewhat tipsy, he explains to his companions that in the far future, all publishing corporations will have been taken over by a single big one. With a tendency of sending giant laser robots through time and space to remind authors throughout history of missed deadlines and contracts that were never honored. Since the Fourth Doctor rather accidentally committed to writing a series of historical kids' books (it was that or a novelty cookbook), Five finds himself with a serious lack of actual knowledge on why Richard III murdered everyone around him, and Shakespeare isn't exactly the most reliable source he can find. So, he vworps the TARDIS over to 1485 to see what actually happened.

While the Doctor strides into the 15th century, Peri and Erimem dive into the TARDIS wardrobe to actually change clothes for the occasion, and get stranded in 1483 instead. The TARDIS promptly vworps off. After a few days, they finally make it to the London pub where the Doctor agreed to meet them, and manage to communicate with him in 1485 through a very convoluted series of letters (and a bit of help from the Ninth Doctor). Unfortunately, the pub's owner — Clarrie — tells Five that the two young wenches spent six months working at his filthy hole of a pub (before he had to fire them to give his two nieces a job instead). Even more unfortunately, he has no idea what happened to them after that. And unfortunately for him, as soon as the 1483 version of him offers them said job (after he hears them talking about it when they read the letter stating it) and starts to lech on Erimem, she breaks his arm on the spot.

Through a series of flashbacks, Peri and Erimem consider what they went through before ending up at the pub: they rescued a teenaged boy and discovered he was one of the princes who should have been murdered by Richard III, according to history. More worryingly, the boy was obviously a robot — a bit of him even came off in Peri's hands. And on top of that, Richard III, who was not in the mood for any nonsense, had hired a mysterious time-travelling advisor named Mr. Seyton. Apart from being really very Obviously Evil, Seyton is dressed in all black and has a pointy beard and a TARDIS and a copy of Shakespeare's Richard III, so Peri has a pretty decent idea of just who he is.

When the Fifth Doctor and Richard III eventually meet in 1485, Richard wearily explains that he's sick and tired of time travellers by now. Little blue men and assorted other time/space tourists have been visiting him since he was 12, and constantly ask him why he killed his nephews. He's also perfectly aware that he'll die a very gruesome death on the battlefield someday, and has simply resigned himself to that fate. He knows full well who the Doctor is (little blue men have a tendency of mentioning him and cowering in fear), and isn't impressed at all by seeing him in person. He does lead the Doctor to the place where his two nephews are being kept. Even though they shouldn't be alive at all in 1485. For the past year and a half, they've been kept mostly hidden and heavily guarded... and have been played by Peri and Erimem, who were forced into a life as prisoners ever since Clarrie fired them. Erimem has become suicidal in the meantime. No, just kidding! They're fine. Both are delighted to finally be reunited with the Doctor, and Peri explains that Mr. Seyton is the Master.

As it turns out, William Shakespeare was quite horrified by what the Doctor told him — how his incomplete history of Richard III's massacre would eventually cast doubt on his royal family and blacken the name of the relatives of Queen Elisabeth, his most beloved patron. So he got the Doctor supremely drunk on ginger beer, snuck into the TARDIS, befriended Richard III in 1483 and attempted to change history despite all the Doctor's warnings. He's promptly shot in the leg with his own ray-gun (pilfered from the TARDIS). Richard III explains that no, he didn't murder anyone at all, and he wasn't planning to. He just re-located the people he was supposed to get rid of. The Duke of Clarence was given a filthy tavern where he could quietly drink himself to death as "Clarrie". And the two boys... were never two boys to begin with, but girls, who now live undercover as tavern wenches. Which is why Peri and Erimem, accidental witnesses who also needed to be hidden away, were the perfect candidates to impersonate them. (The "robot" bit that fell off? A codpiece.)

Shakespeare is deposited in the middle of the first performance of Richard III. The real Richard III is really fucking annoyed when he sees the caricature of a cripple he'll become in fiction, and decides to murder Shakespeare on the spot. The Doctor tricks Shakespeare into mistaking an electric toothbrush for a Sontaran gun, and Peri tricks Erimem into breaking Shakespeare's arm, after which the publishing robot has a thing or two to discuss with Shakespeare about missed deadlines and neglected contracts. Richard III had kindly requested the Doctor to drop him off on the battlefield of Battle of Bosworth Field, so he could finally end his life and just get it all over with, and Shakespeare rushes out of the TARDIS into said battlefield — half-crippled, with a broken arm and chased by a giant laser robot — where he gets mistaken for Richard III and promptly dies a very undignified death.

In the aftermath, the Doctor gives Richard III (who's luckily had a good education) a few pointers on how to be a playwright, wishes the two nieces a long and happy life as "Shakespeare's daughters", and explains that the TARDIS's random teleportation was an unfortunate psychic side-effect of him having been drugged with ginger beer. (Put less eloquently, she had the hiccups.) The Doctor is glad the whole thing is finally over with. All's well that ends well, except Erimem admits that her suicidal moment was really not a joke after all — and she's horrified at having pretended to Peri that she was fine.