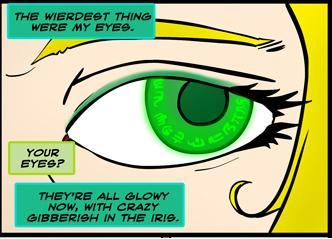 She sees dead people
Psychiatrist: So then there are other people like yourself? People who can see the "un-seeable"?
Riley: Yeah, it's like they're all part of Little Orphan Annie's Secret Society and I finally have the super secret decoder ring... In my brain meats.
Advertisement:

Geist Panik is a webcomic by Brian Wilson (not the one in The Beach Boys) about a young woman named Riley Hood, who wakes up with amnesia, glowing runes in her oddly-coloured eyes, and a tattoo of a unicorn on her butt. She quickly discovers that she can see ghosts and other supernatural creatures and decides to do the only sensible thing: Hunt ghosts down for cash.

When the official method of selling spirits proves to be not-so-lucrative, Riley takes to selling the spirits on craigslist... Which prompts her to receive unwanted attention from a mysterious murderer named Lee John and a life sentence of otherworldly service partnered with a Wendigo and a Goblin.

The last news post is dated October 6th, 2009, and the site's domain has expired more than once, which doesn't give much hope of the comic ever being updated again.