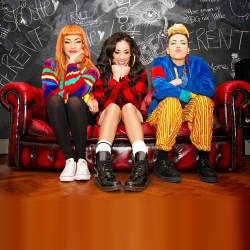 Why don't you hurry up and ... love them?
Advertisement:

Stooshe are an English Hip-Hop and R&B trio, comprising members Alexandra Buggs, Karis Anderson and Courtney Rumbold. Formed and based in South London, the group has gone on to achieve two top-five singles in "Love Me" and "Black Heart". They have also supported the likes of Nicki Minaj and Jennifer Lopez on tour.

Though their image is prone to people thinking of three Jessie Js put into one group, their music is actually soul reminiscent of groups such as The Supremes. However, their lyrics are often more explicit and swearier than the Motown songs they were inspired by.