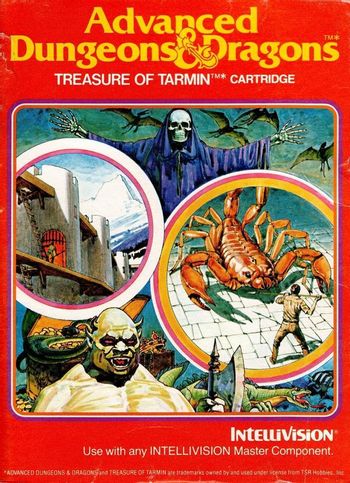 Khaki and chambray, though?
Advertisement:

Advanced Dungeons & Dragons: Treasure of Tarmin, also known as Minotaur, and ADVANCED DUNGEONS & DRAGONS CARTRIDGE, is a 1982 Intellivision game published by Mattel Electronics. Though not among the console's better-known titles. Treasure of Tarmin was essentially the first console Role-Playing Game that is recognizable to modern gamers. Utilizing advanced (for the time) Faux First-Person 3D gameplay with randomized dungeons, tons of weapons, items and monsters, it was a technical marvel at the time, and features gameplay which is every bit as complex as some modern Role Playing Games.

You have made your way into the lair of the Minotaur, in search of the mythical Treasure of Tarmin. This enormous labyrinth is crawling with all kinds of deadly monsters, traps and secret doors. There are also plenty of weapons, items and magical artifacts to help you overcome these challenges. As you go further down, the quality of weapons increases, newer and tougher beasts wait in ambush, and every single level will throw something at you that you've not yet seen. Though the goal is to vanquish the Minotaur and collect the titular Treasure, you may keep going as long as you have the patience. Depending on the difficulty level you choose, there may be quite a lot more to see after the Minotaur falls!