Roleplay / In the Beginning, There Was Man 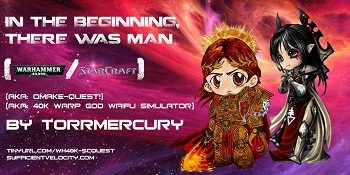 Adam and Ynnead, God-Emperor and God-Empress of Man and Eldarkind
Omakes for the Omake God, Fanworks for the Fan Throne. Let the Thread drown in Omakes.
— Chief18753

You are the God Emperor of Mankind in the End Days and you are leading the remnants of the Imperium on an Exodus to another universe to recover and rebuild. One day you will return home to purge the Great Enemy and make Mankind the true rulers of the galaxy.

Made by torrmercury, read the awesome here

In the Beginning, There Was Man is a forum quest run by torrmercury on the Sufficient Velocity forums. The players take control of first the Emperor of Mankind and then others in their attempt to forge a new Imperium in a new Galaxy, in the hopes of growing strong enough to one day return to Terra and retake the galaxy from Chaos. At the beginning of the quest the players were offered a number of options for the quest's format and chose to play an Empire quest, leading a chosen few in an Exodus to a new home.

Like most Empire and Civilisation quests the players vote on various plans and make rolls to determine outcomes for their decisions. Unlike many such quests the size of the dice rolled is often different, for the Imperium is made of many souls with widely different capabilities. The more numerous and powerful the individual or group undertaking an action is, the larger the dice used. From 1d4s for lone individuals, to 1d12s for squads of Space Marines and all the way up to 1d100s for actions undertaken by godlike entities such as the Emperor himself. In addition to the luck of the dice the players may write in with omakes that torrmercury sorts into the catagories of Canon, Partially Canon, Annuls of History, Analysis, Legends of the Exodus and Artworks. These omakes are given bonuses related to their subject matter, the most common being a small bonus to the next related roll. As of 16/04/2016 there are 410 cataloged omakes and more waiting for torr's assessment. Omake Quest indeed.

Sadly, torr found himself unable to continue the quest, officially announcing its cancellation on April 25th, 2016.