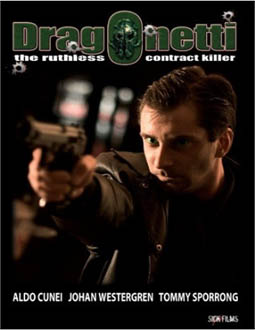 This lout will take you out

Dragonetti the Ruthless Contract Killer is the prequel to Die Zombiejäger, focusing on the character Claudio Dragonetti. The film had a (relative) Big Budget Beef-Up, the first film costing 20.000 SEK and "Dragonetti" costing 100.000 SEK. The film follows the activites of the hitman Dragonetti, leading up to his appearance in Die Zombiejäger.

The stuntmen who made Sector 236: The Wrath of Thor, provided stunts for this film in return for director Jonas Wolcher providing special effects for the former. Another film focusing on Claudio Dragonetti has been announced.

The following tropes apply to Dragonetti the Ruthless Contract Killer: