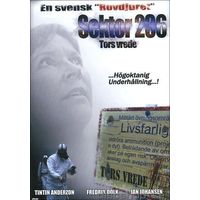 A Swedish science fiction/horror film made for 45679 USD. It tells the story of a military zone in northern Sweden officially known as Sector 236, but also called The Wrath of Thor where a platoon of Fjälljägare (Swedish Army Mountaineers) has disappeared. A group of elite soldiers and a couple of scientists goes to investigate. Oh, I almost forgot! There is a bunch of campers involved to. What follows is a strange story about dimension traveling and aliens.

Considered by some the best worst Swedish movie.