Film / The Abduction of Saint Anne 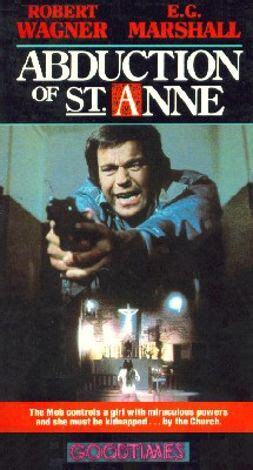 The Abduction of Saint Anne is a TV movie directed by Harry Falk and written by Edward Hume, based on the Thomas Patrick McMahon novel The Issue of the Bishop's Blood and produced by QM Productions. It aired on January 21, 1975 on ABC.
Advertisement:

Seventeen-year-old Anne Benedict (Kathleen Quinlan) is rumored to have worked miracles. Unfortunately, her father, Mafia godfather Frank Benedict (Alfred Ryder), is holding her incommunicado at his mansion. Bishop Francis Paul Logan (E.G. Marshall) hires atheist private detective Dave Hatcher (Robert Wagner) to do two things: determine if Anne can really work miracles, and, if so, abduct her so she can be transported to a convent in Argentina for further study. Dave reluctantly investigates, but his interest increases after an attempt on his life.

The Abduction of Saint Anne contains examples of: