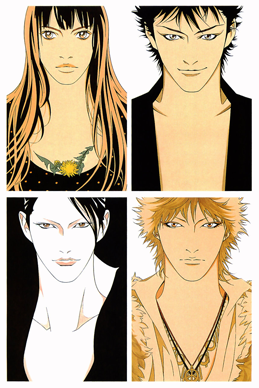 Cult classic manga by Atsushi Kamijou that was serialized between 1988 and 1992. Contrary to the title, it contains no sexual intercourse at all, albeit it is not without fanservice. In fact, "sex" here refers to "gender."

Taking place in Japan during The '80s, the story follows Kaho, a not so average high school girl who, when her class goes on a school trip to Okinawa, seizes the opportunity to look for her childhood friend, Natsu, whom she hasn't seen in six years. However, instead of Natsu she finds a strange young man named Yuki, a petty criminal who takes her for a ride in a stolen car, gets her involved in a gang fight and almost gets her killed. As it turns out, he's Natsu's friend, and the two of them seem to be involved with gangs and live from smuggling and selling stuff in the black market. Kaho is not one to be easily intimidated, though, and the manga chronicles the trio's adventures in Okinawa and Fussa, involving high school delinquents, weirdos, heists, the US army, the Korean maffia, yakuza, even more yakuza, and a shady assassin.