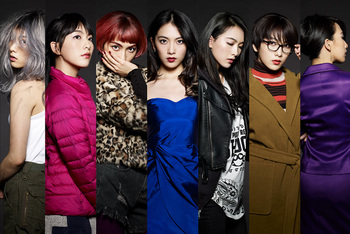 Orphan Black: Seven Genes, or simply Orphan Black, is a Japanese drama series and remake of the original Canadian television series of the same name. It starts Kang Jiyoung as the clone sisters.

While there are alterations, the premise is basically the same as the original; protagonist Sara Aoyama (Jiyoung), an orphan and a newly single mother, is living a tough life due to poverty, lack of understanding from society and other problems that led to her being separated from her daughter. She believes that if she has money, her life will change. One day, she sees a woman killing herself by jumping in front of a train. The woman who jumped looks just like her doppleganger. Initially stunned, Sara takes the woman's bag in hopes of improving her own life. However, her life instead takes an unpredictable turn...

The remake was produced by Telepack for Tokai TV under licence from BBC Worldwide.