Literature / A Case of Exploding Mangoes 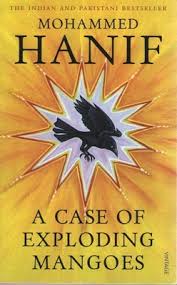 A Case of Exploding Mangoes is a 2008 novel by Pakistani writer Mohammed Hanif. In the final months before his suspicious death by plane crash, Pakistani dictator General Zia ul-Haq grows increasingly paranoid. Ali Shigri, a Pakistan Air Force junior officer, meanwhile finds himself being interrogated after his close friend Obaid dies while stealing a plane from the base at which both are training. Features a very short cameo by Osama bin Laden.

A Case of Exploding Mangoes provides examples of the following tropes: