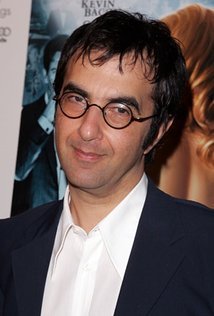 Atom Egoyan (born July 19, 1960) is an Armenian-Canadian filmmaker known for his films Exotica, The Sweet Hereafter, Where the Truth Lies and Chloe. His stylistic trademarks are explorations of alienation, isolation and sexuality (though often as Fan Disservice, sometimes not, but at the very least always in service of the story), as well several uses of non-linear storytelling.
Advertisement:

Egoyan's rise took place in the late 1980s and early 1990s when independent film was becoming a force in Hollywood. He is generally considered on the level of Steven Soderbergh and Quentin Tarantino, and is seen as one of the most important filmmakers in Canada, along with David Cronenberg and Don McKellar. His work often lends itself to Wild Mass Guessing, due to his occasional use of the Mind Screw.